Coming all the way from Stuttgart, Germany, Dundu (also spelled as DUNDU) is far from being an ordinary puppet. Created by Tobias Husemann in 2006 in collaboration with Stefan Charisius, a kora player, Dundu was born after intensive research of puppetry, specifically giant puppets. This five-metre-tall figure is a high-tech puppet with a sophisticated design, made mainly of fiber and aluminum. Dundu weights almost 20 kilograms and is steered by five puppeteers. Illuminated with LED light, Dundu walks the streets to improvised music on the kora, a stringed instrument from West Africa. According to the Dundu’s creators, the figure serves as an inspiration, as it connects cultures and spreads hope across the globe. Infusing streets and public squares with sense of vitality and joy, inciting curiosity and laughter, Dundu creates a unique commotion and stirs good feelings in the hearts of passersby. With this spirit, between 1 and 3 January 2015, the giant puppet paid a few visits to public locations, starting with Cairo’s Imbaba district and moving towards Al-Hussein area in Old Cairo, before heading to the southern city of Fayoum and its Tunis Village.

Fabian Seewald, one of the main dynamos behind the puppet’s visit to Egypt explains to Ahram Online that the team planned to spend New Year in Soma Bay, a coastal resort on the Red Sea. Using this opportunity, they decided to bring the puppet along, creating awareness and inspiring and spreading appreciation for this form of street art. Omar Elshamy, one of the Egyptian members of El-Kousha puppet troupe points to the unique experience that Dundu provides. “It was a cold night in Fayoum. When Dundu showed up, at first a few faces peeked through the closed windows, then more and more people started watching and it didn’t take them long to come down to the street. It was wonderful to see children with their eyes filled with happiness,” Elshamy recalled. In Fayoum, the team from Germany paid a visit to El-Kousha’s workshops, a cradle of Egyptian giant puppets among whom we recall those impersonating then-ruling Supreme Council of Military Forces (SCAF) as they marched across Tahrir square in May 2012. El-Kousha puppet troupe also took part in Mawred’s CirCairo and most recently, its dragon was featured in Mahatat project ‚Art of Transit.‘ For Elshamy, El-Kousha, and many other Egyptians, Dundu is no stranger. The puppet already made its appearance on New Year’s Eve in 2013 at Tahrir Square.

“It was a very special experience as we walked to Tahrir Square in a procession dubbed as Peacewalk in Kairo. There was a wonderful momentum,” Seewald recalled. He also acknowledged the challenging dosage of risk that the team had to manage. He underlines that Dundu is a very tranquil creature and who aims to spread peace across the square and Egypt. The philosophy behind the puppet is carried around the world and since its creation eight years ago, Dundu has appeared in music, lights and numerous other festivals and occasions in Germany as well as many other countries. Dundu’s most recent trips include visits to Spain, Belgium, and participating in La Fête des Lumières (Light Festival) in Lyon, France. Dundu’s journeys took him across five continents and as far east as South Korea and China. He also made an appearance in the United Arab Emirates in 2014.

Today, Dundu’s team numbers 35 artists, a creative collective consisting of puppeteers, jugglers, dancers, clowns and actors, all of whom put their knowledge into understanding what Seewald refers to as the “seemingly endless potential of Dundu.”

„We educate our own puppeteers and walk with puppet masters and other theatre coaches such as Frank Söhnle, War Horse Puppet crew and Peter Shub and more,“ Seewald elaborates.

„DUNDU is the German Acronym for Du Und Du meaning “you and you,“ a philosophy, which according to Seewald, reflects on the structure of the group and that the puppet that is animated by several people. Seewald sees in the process a metaphor and a creative visualisation of human life and human beings, who trust each other as they collaborate.

Music is an element of equal importance to the procession. The performers refer to this as „DUNDUMUSIK,” an atmospheric freely improvised music, primarily played by the kora. Since Charisius is the founder of the project as well as a kora player, it is an opportunity for him to fuse his talents. Whether on the narrow streets of Al-Hussein or peeking through the windows of Fayoum residencies, it is the magic of the Dundu that creates a unique atmosphere. Inspiring and thought provoking, Dundu combines a well-planned sophistication of artistic puppetry with an element of surprise and improvisation. Standing in between a theatrical procession and a typical street happening, Dundu redefines the art of puppetry, challenges and almost dilutes the borders between art and technology, ultimately allowing us to enjoy the show.

„DUNDU loves Egypt. We hope to come back soon and inspire even more. Maybe with official permission we could create many peaceful vibes in town,“ Seewald concludes. 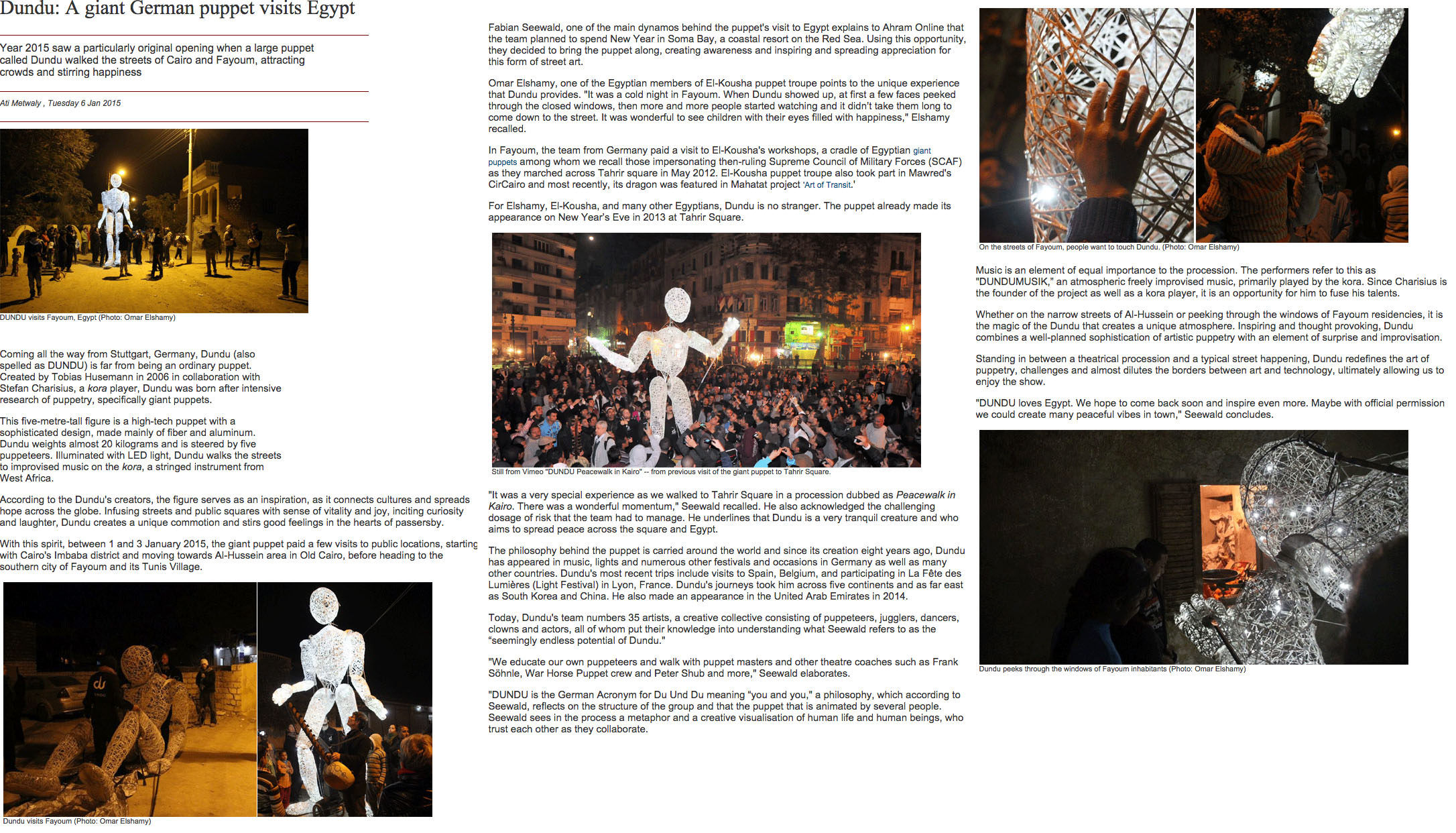