An Electric Temple of Culture Fires Up

In a former coal station in Germany, a novel hybrid business is set to open: a renewable energy plant and art museum in one.

LUCKENWALDE, Germany — Disused power plants make excellent museums. Tate Modern in London is perhaps the most famous, but from Toronto to Shanghai, and Istanbul to Sydney, these engines of the industrial age have been remade as temples of culture, long after the turbines have been switched off. Now, 30 miles south of Berlin, a new contemporary art center in a former coal station will present exhibitions and produce power at the same time. The center, E-Werk Luckenwalde, which is set to open Sept. 14, is a renewable energy plant and art museum in one. In addition to shows across three galleries and low-cost studios that artists can rent, E-Werk will generate electricity on site by a process called biomass pyrolysis, in which pine wood chips are heated to temperatures of over 850 degrees Fahrenheit, and then cooled in a reactor. The electricity will be sold on Germany’s national grid, and the profits will be used to run the center.

Pablo Wendel, a German artist, who, with his partner, Helen Turner, is one of the entrepreneurs behind the venture, said in a telephone interview that he hoped the plant would produce enough energy to power the four-story building, and as many as 200 houses. “We talk a lot about sustainability these days,” Mr. Wendel said, “but if we don’t think about it on a bigger scale — on a social scale, a creative and artistic scale, and a visual and aesthetic scale — we will have problems.” The opening night of the arts center will begin with a work by Mr. Wendel. The power plant’s former coal conveyor belt will power into action in darkness, carrying wood chips through the building and into a basement engine room, where they will be heated and cooled using a new pyrolysis machine. The electricity generated will immediately turn on the building’s lights. “It’s a nice metaphor for the whole project,” Mr. Wendel said, “to show how you can transform places into a piece of art.

E-Werk’s opening comes at a time when financial ties between European museums and energy producers are increasingly in focus. The British Museum and Tate galleries in London have been repeatedly targeted by activists over sponsorships from the oil giant BP; last year, the Van Gogh Museum in Amsterdam ended a collaboration with the petroleum company Shell after protests. Other museums, like the Prado and Thyssen-Bornemisza museums in Madrid, have trumpeted their sustainability credentials by making partnerships with Acciona, a Spanish renewable energy conglomerate. But E-Werk is the first arts institution to bring electricity production in-house.

The former coal plant that will house E-Werk was founded in 1913, and it became part of the state infrastructure of communist East Germany in 1949. Bernd Schmidl, the station’s production manager from 1976 to 1994, said in an interview that he worked there alongside 60 others, including his father, sister and father-in-law. “Without this factory, there wouldn’t have been any technical progress in the area,” he said. After the fall of the Berlin Wall, the plant was taken over by a West German electricity company that later went bankrupt. “This factory didn’t get shut down because it was faulty,” Mr. Schmidl said, pointing out that “the customers who were getting energy disappeared” after reunification. Many workers from the former East Germany went west to seek better employment opportunities.

The bricks and mortar of the plant remain, however, and much of the building has been preserved in the recent renovation. The vast building is decorated with original tiled floors, huge green doors and a stained-glass window shaped like a cloud that depicts a hand grasping lightning bolts. On the second and third floors are studios that artists can lease for 3 to 4 euros per square meter, or about 30 cents to 40 cents per square foot. According to a spokesman from B.B.K. Berlin, a professional association for Berlin’s visual artists, studio rents in the city center can be as high as €35 per square meter.

The seven studios are already fully leased, said Ms. Turner, E-Werk’s co- founder. Some of the artists who will work there have relocated to Luckenwalde from Berlin, she added. “Berlin is reaching saturation point for artists,” she said in a telephone interview. “It’s getting so expensive that it’s not possible to create experimental practices any more,” she added. Mr. Wendel said the idea for E-Werk grew from his experimental art practice. He recalled that, in 2008, when he was a struggling conceptual artist living in Stuttgart, in southern Germany, he came up with the idea of producing artworks that made their own electricity. Making money was a concern, too: Mr. Wendel’s ephemeral performances, which include one where he dressed as a terracotta soldier and sneaked into an archaeological site in China to stand among the statues there, were proving hard to sell.

In “Schmarotzer” (“Parasite”), a work from that year, Mr. Wendel mounted solar panels next to illuminated store signs and advertising billboards as a work of performance art. It generated enough electricity to power a single light bulb. Three years later, in a work called “Twenty-Four/Seven,” Mr. Wendel harvested electricity from the hands of a clock on a Stuttgart church by installing a dynamo that converted its mechanical energy. He raised 0.1 kilowatts, enough to boil a kettle. It was the idea of being able to cover costs by creating electricity that led to the development of E-Werk, Mr. Wendel said.

Now fully realized and registered as a nonprofit, E-Werk will be inaugurated with exhibitions by Nicolas Deshayes and Lucy Joyce. Mr. Deshayes’s wall-mounted sculptures look like engorged intestines, but they double as cast-iron radiators, and will heat up as soon as power flows through the building on the opening night. Ms. Turner described them as “huge beasts” that suggest “the planet’s iron core and fundamental genesis.” Ms. Joyce’s work, called “Electric Blue,” takes place outside the power plant and aims to bring the local community inside. She has created seven mirrored sculptures, each shaped like arrows and about seven feet tall, and asked people who live in Luckenwalde, including Mr. Schmidl, the former plant manager, to stand on rooftops around town, holding them up to guide visitors toward E-Werk. “The people of Luckenwalde are very proud that the old structure of the plant lives on,” Mr. Schmidl said. “It’s a positive example of what can happen when people take some initiative.” 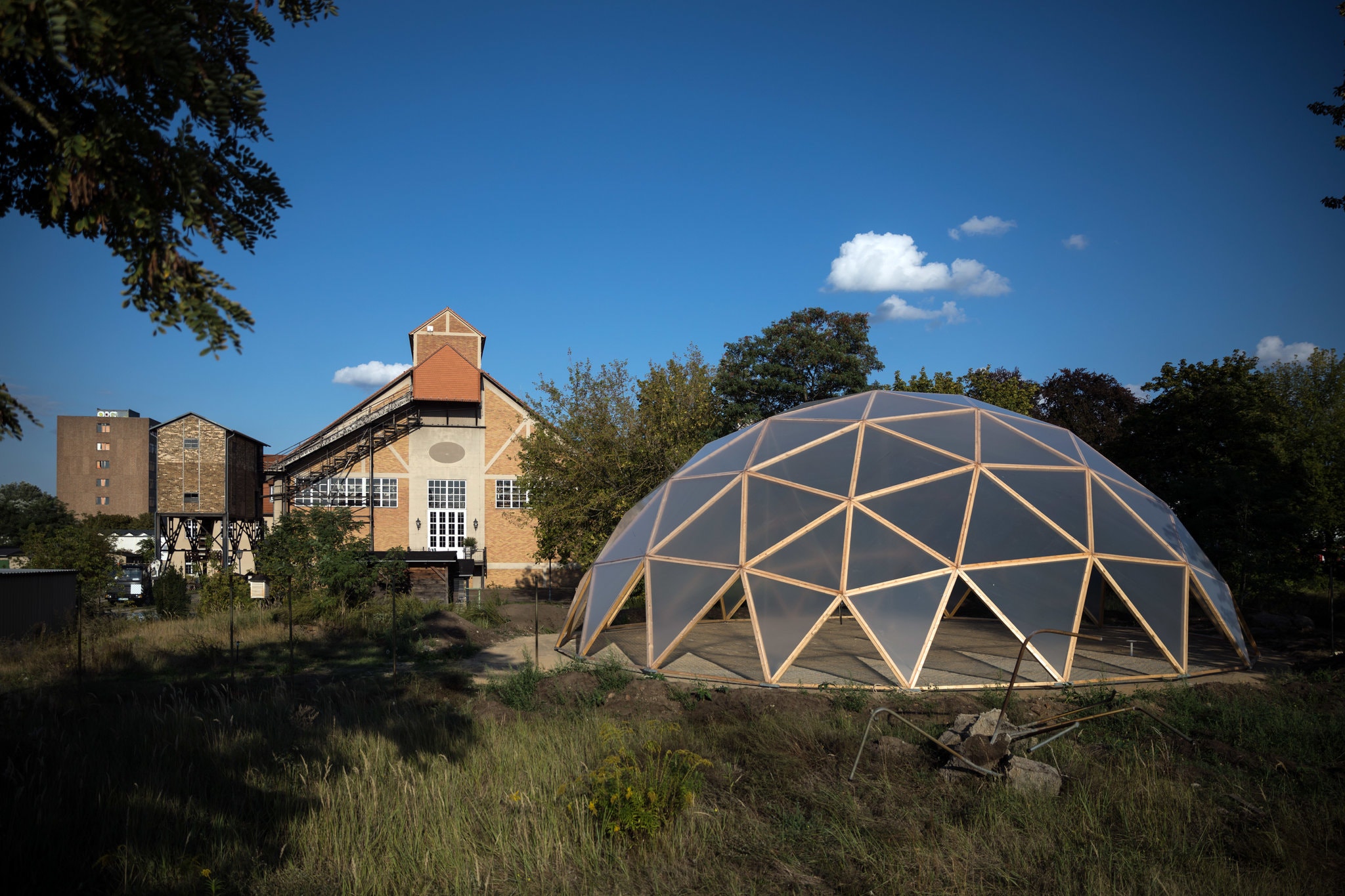